-compact space if it is the union of countably many compact subspaces. Clearly, any

-compact spaces is a Lindelof space. The discussion here centers on the following theorem.

-compact spaces. Then the product space

Theorem 1 is Exercise 3.8G in page 195 of General Topology by Engelking [1]. The reference for Exercise 3.8G is [2]. But the theorem is not found in [2] (it is not stated directly and it does not seem to be an obvious corollary of a theorem discussed in that paper). However, a hint is provided in Engelking for Exercise 3.8G. In this post, we discuss Theorem 1 as an exercise by giving expanded hint. Solutions to some of the key steps in the expanded hint are given at the end of the post.

It is helpful to first prove the following theorem.

Theorem 2
For each integer

be compact spaces and let

be the topological sum:

Note that in the topological sum

is both closed and open in the topological sum. Theorem 2 is essentially saying that the product of countably many

-compact spaces is Lindelof if each

be a compact space. Let

be a subspace of

. Suppose that there exist

, such that for all

is a Lindelof space.

The following theorem connects the hint (Lemma 3) with Theorem 2.

Theorem 4
For each integer

be the one-point compactification of

in Theorem 2. Then the product

is a compact space. Furthermore,

is a subspace of

in Theorem 2 is a locally compact space. To define the one-point compactifications, for each

with the topology defined as follows:

For convenience, each point

is called a point at infinity.

be as described in the statement for Lemma 3. Let

be a collection of open subsets of

. We would like to show that a countable subcollection of

is also a cover of

is an open cover of

and there is a finite subset of

that is a cover of

and thus a cover of

. Thus we can assume that

, which is compact. We make the following claim.

be the union of all possible

To establish the claim, let

is an open cover of

. By the compactness of

, there are finitely many

. This establishes the claim that

is clear from the definition of

is compact since it is closed in

. The intersection of finitely many

is also compact. Thus the

in the definition of

in the above claim is compact. There can be only countably many

in the definition of

-compact space that is covered by the open cover

is a cover of

too. This completes the proof that

Proof of Theorem 4
Recall that

is the one-point compactification of

, which is the topological sum of the disjoint compact spaces

is a product of compact spaces,

is compact and thus closed in

. There are only countably many

We claim that the countably many

have the property indicated in Lemma 3. To this end, let

. There exists an integer

must be the point at infinity). Choose

large enough such that

. Thus the sequence of closed sets

This is a discussion on a compact space called Helly space. The discussion here builds on the facts presented in Counterexample in Topology [2]. Helly space is Example 107 in [2]. The space is named after Eduard Helly.

be the closed unit interval with the usual topology. Let

be the set of all functions

. As a product of compact spaces,

is said to be increasing if

(such a function is usually referred to as non-decreasing). Helly space is the subspace

consisting of all increasing functions. This space is Example 107 in Counterexample in Topology [2]. The following facts are discussed in [2].

From the last two facts, Helly space is a compact non-metrizable space. Any separable metric space would have countable spread (all discrete subspaces must be countable).

stems from the fact that

is a closed subspace of the compact space

is the space of all countable ordinals with the order topology. Recall

is the product space

is Example 106 in [2]. This product is not normal. The non-normality of

is based on this theorem: for any compact space

is normal if and only if the compact space

is not normal. However, the product

is normal since Helly space

contains a copy of the Sorgenfrey line, consider the functions

having the Sorgenfrey topology and with the range

being a subspace of Helly space, it can be shown that

contains a copy of the Sorgenfrey plane

is the product space

is Helly space consisting of all increasing functions in

. Consider the following two subspaces of

is a closed subset of

, hence compact. We claim that subspace

is separable and has a closed and discrete subset of cardinality continuum. This means that the subspace

is not a normal space.

First, we define a discrete subspace. For each

as a subspace of

is discrete. Of course it is not discrete in

is compact. In fact, for any

). However, it can be shown that

is closed and discrete as a subset of

We now construct a countable dense subset of

. For example, we can let

be the set of all open intervals with rational endpoints. Furthermore, let

be a countable dense subset of the open interval

(in the usual topology). For convenience, we enumerate the elements of

We also need the following collections.

is to the left of

. Note that elements of

as detailed above, we define a function 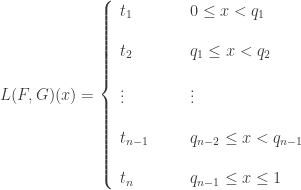 The following diagram illustrates the definition of

be the set of

is a countable set. It can be shown that

is dense in the subspace

is dense in the entire Helly space

To summarize, the subspace

is separable and has a closed and discrete subset of cardinality continuum. This means that

is not normal. Hence Helly space

is not hereditarily normal. According to Jones’ lemma, in any normal separable space, the cardinality of any closed and discrete subspace must be less than continuum (discussed here).

The preceding discussion shows that both Helly space and the square of Helly space are not hereditarily normal. This is actually not surprising. According to a theorem of Katetov, for any compact non-metrizable space

is not hereditarily normal (see Theorem 3 in this post). Thus a non-normal subspace is found in

. In fact, for any compact non-metric space

, an excellent exercise is to find where a non-normal subspace can be found. Is it in

or the cube of

? In the case of Helly space

, a non-normal subspace can be found in

A natural question is: is there a compact non-metric space

are hereditarily normal and

is likely to fail hereditarily normality in either

. See here for a discussion of this set-theoretic question.