The notion “every compact subspace is metrizable” is a very broad class of spaces. It includes well known spaces such as Sorgenfrey line, Michael line and the first uncountable ordinal

(with the order topology) as well as Moore spaces. Certain function spaces are in the class “every compact subspace is metrizable”. The following diagram is a good organizing framework. 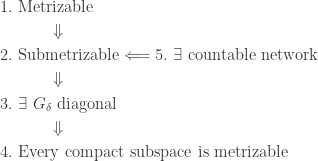 be a space. It is submetrizable if there is a topology

is a metrizable space. The topology

is said to be weaker (coarser) than

is submetrizable if it has a weaker metrizable topology.

be a set of subsets of the space

is said to be a network for

if for every open subset

. Having a network that is countable in size is a strong property (see here for a discussion on spaces with a countable network).

The diagonal of the space

is the intersection of countably many open subsets of

, see Lemma 1 in this previous post on countable network. The implication

is left as an exercise. To see

be a compact subset of

. The property of having a

-diagonal. According to a well known result, any compact space with a

None of the implications in the diagram is reversible. The first uncountable ordinal

is an example for

. This follows from the well known result that any countably compact space with a

-diagonal is metrizable (see here). The Mrowka space is an example for

(see here). The Sorgenfrey line is an example for both

To see where the examples mentioned earlier are placed, note that Sorgenfrey line and Michael line are submetrizable, both are submetrizable by the usual Euclidean topology on the real line. Each compact subspace of the space

is countable and is thus contained in some initial segment

which is metrizable. Any Moore space has a

-diagonal. Thus compact subspaces of a Moore space are metrizable.

We now look at some function spaces that are in the class “every compact subspace is metrizable.” For any Tychonoff space (completely regular space)

is the space of all continuous functions from

is a separable space. Then every compact subspace of

Proof
The proof here actually shows more than is stated in the theorem. We show that

is submetrizable by a separable metric topology. Let

be a countable dense subspace of

has a countable base. Let

be a countable base for

be the restriction map, i.e. for each

is a projection map, it is continuous and one-to-one and it maps

is a continuous bijection from

is a base for a topology on

. Once this is established, the proof of the theorem is completed. Note that

is countable and elements of

are open subsets of

. Thus the topology generated by

is coarser than the original topology of

to be a base, two conditions must be satisfied –

is a cover of

is a base for

and since elements of

are preimages of elements of

, it is straightforward to verify these two points.

is the cardinality continuum and each

is a separable space. Then every compact subspace of

The key fact for Corollary 2 is that the product of continuum many separable spaces is separable (this fact is discussed here). Theorem 1 is actually a special case of a deep result.

is a product of separable spaces where

is any infinite cardinal. Then every compact subspace of

Theorem 3 is a much more general result. The product of any arbitrary number of separable spaces is not separable if the number of factors is greater than continuum. So the proof for Theorem 1 will not work in the general case. This result is Problem 307 in [2].

Theorem 1 is stated in a way that gives the right information for the purpose at hand. A more correct statement of Theorem 1 is:

is separable if and only if

is submetrizable by a separable metric topology. Of course, the result in the literature is based on density and weak weight.

The cardinal function of density is the least cardinality of a dense subspace. For any space

, is the least cardinaility of a base of

. The weak weight of a space

for which there is a continuous bijection from

. Thus if the weak weight of

, then there is a continuous bijection from

onto some separable metric space, hence

has a weaker separable metric topology.

There is a duality result between density and weak weight for

coincides with the weak weight of

and the weak weight of

coincides with the density of

. These are elementary results in